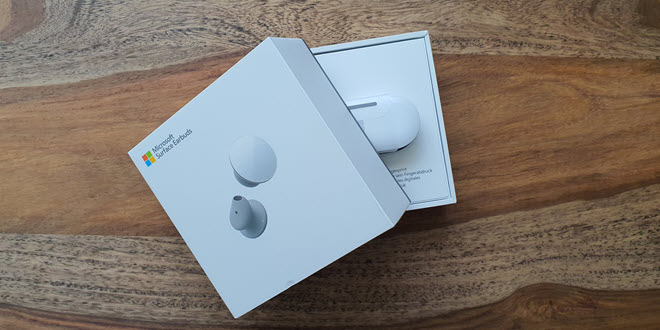 I have had the new Surface Earbuds since Monday and they have been in use for several hours every day. In the following I would like to describe my first impressions, which – as can be seen from the heading – are mixed. But one after anonther.

In the packaging we find the Surface Earbuds in the storage and charging box, in which they can only be inserted correctly, by the way. A polarity reversed magnet ensures that the left earbud jumps towards you again when you try to put it in the right recess. 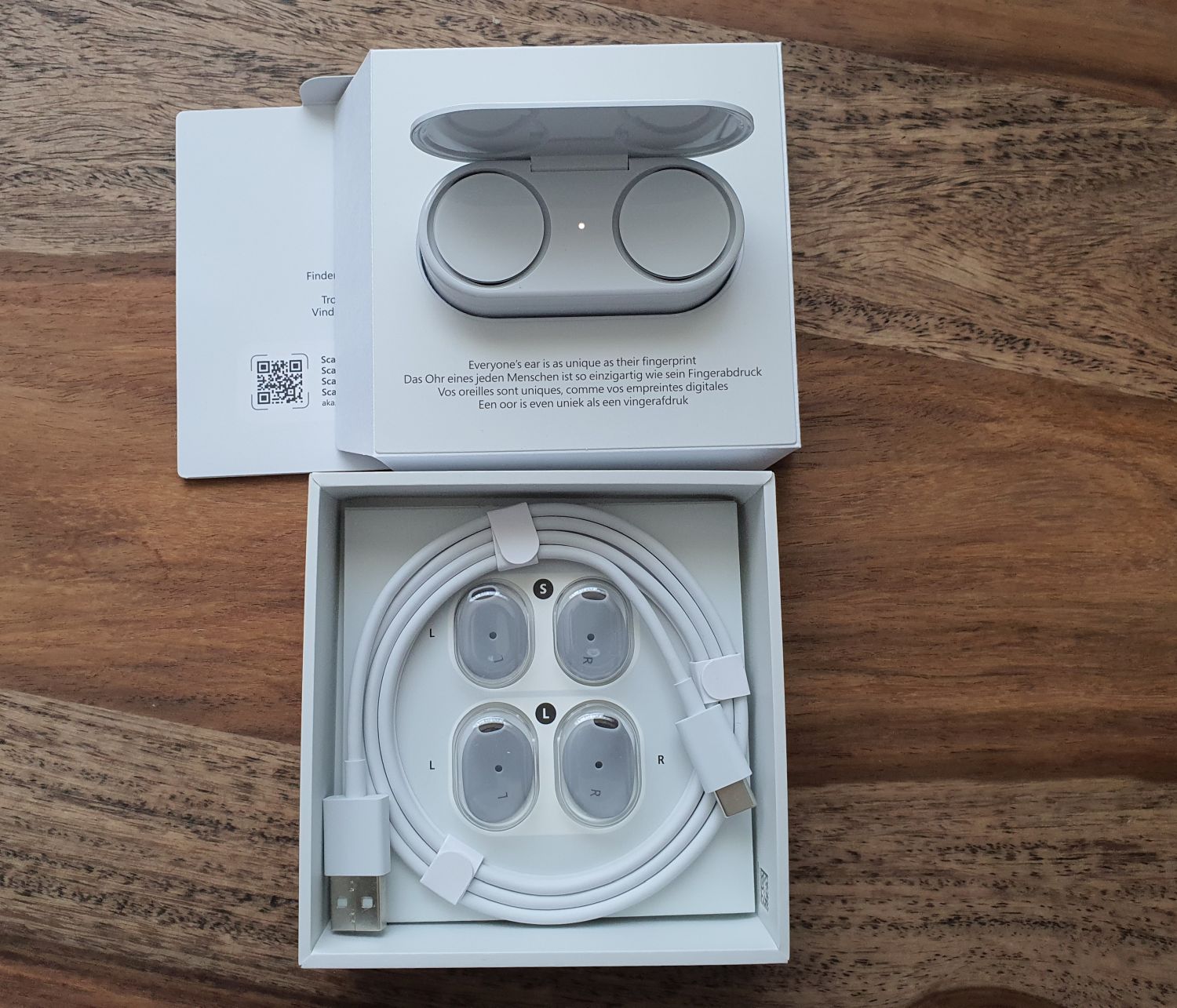 In the small box we also find an illustrated quick start guide, a USB-C charging cable and the attachments in sizes S and L, size M is pre-assembled at the factory.

It is recommended to download the Surface Audio app for Windows, Android or iOS. With this, commissioning is child’s play and there are also a few video instructions. Anyone who has ever put a Bluetooth device into operation can of course get it done without instructions.

You have to practice the earbuds a little bit. They are not pressed into the ear canal, as is usually the case with in-ears, but sit in the outer part of the ear. I tried to hold on to it somehow. I found a still detailed recording of my ear somehow unsavory myself. 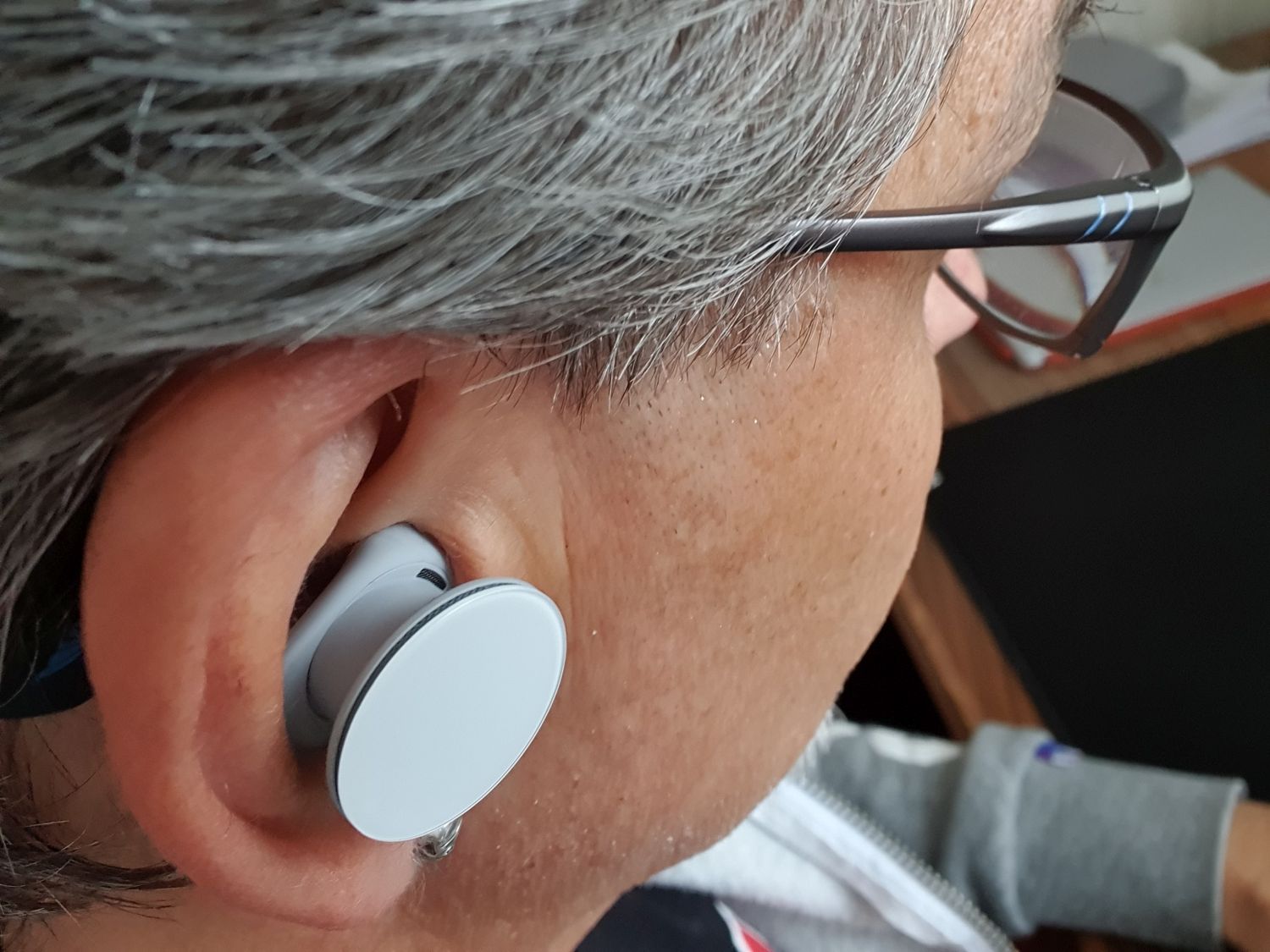 In any case, you should test the included attachments all in order to find the optimal size. For me, size M would be ok, but with size L they sit more stable without making it feel uncomfortable.

The Surface Audio app mentioned at the beginning is also indispensable because a firmware update is immediately available and another update has to be loaded to change the language of the user guidance to German.

I have to send one thing in advance: In-ear headphones are not my thing Not because I basically don’t like them, but because I have not yet found any in-ears that are really reliable and at the same time pleasant to wear over a longer period of time are wearing.

On this point, the surface earbuds are a sensation for me: You can hardly feel them, even if they are worn over a longer period of time. I had it in my ears for over six hours on Tuesday and felt no discomfort or tenderness.

At the same time they are really bomb-proof – and I tried really hard to get rid of them:

I was just trying to headbang the surface earbuds out of my ears for Metallica’s “Master of Puppets”. I did not succeed 👍
And no, there is no video of it 😆

As for my basic problem with in-ears, the story could end here with a happy ending. 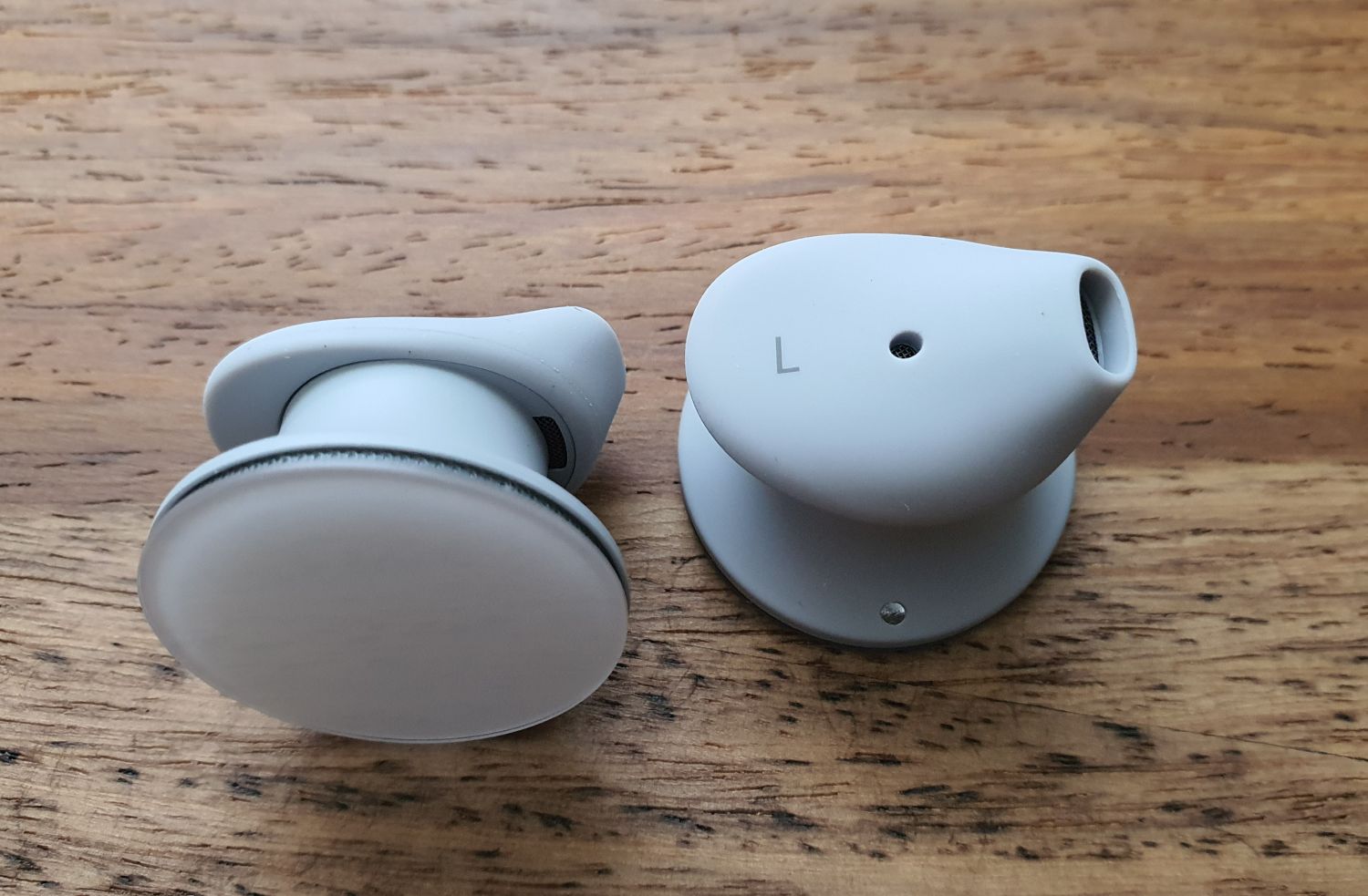 For the reasons mentioned above, I am basically disqualified to assess the sound quality of the Surface Earbuds. I should be able to compare it with at least one competitor product in order to have an objective clue.

So I can only say: I think the sound is okay, but you should definitely use the Surface Audio App and the equalizer it contains to adjust the sound image to your own taste. In the flat setting of the equalizer, the sound is indeed “flat” and there is a lack of highs and basses.

For the fact that the earbuds sit on more than in the ears, the sound is very rich overall. If I take the size S instead of the size L, I can screw the earbuds into my ear canal as usual, then the sound becomes fuller again, but then the long-term comfort is gone, after half an hour I got pressure pain .

I have also made a few calls to the earbuds and asked the other person how I sound. “Quite normal” was the answer.

The surface earbuds have no noise canceling. The microphones have a function called “Noise Reduction”, which filters out background noise and is intended to ensure that only the spoken word arrives at the person opposite.

The design of the surface earbuds has already been the subject of much criticism and nuisance. “Form follows function” applies here. The earbuds have gesture controls, so you inevitably need an area to wipe over.

You should also be able to use this gesture control later, for example to scroll through the slides in a PowerPoint presentation, so you no longer need a clicker and your hands are free. However, this function is currently not yet available.

On the right earbud you adjust the volume by swiping up or down, on the left earbud you swipe forwards or backwards to jump to the next or previous piece of music. With a double tap (left or right) you can pause and resume playback, tap and hold to call up the digital assistant. 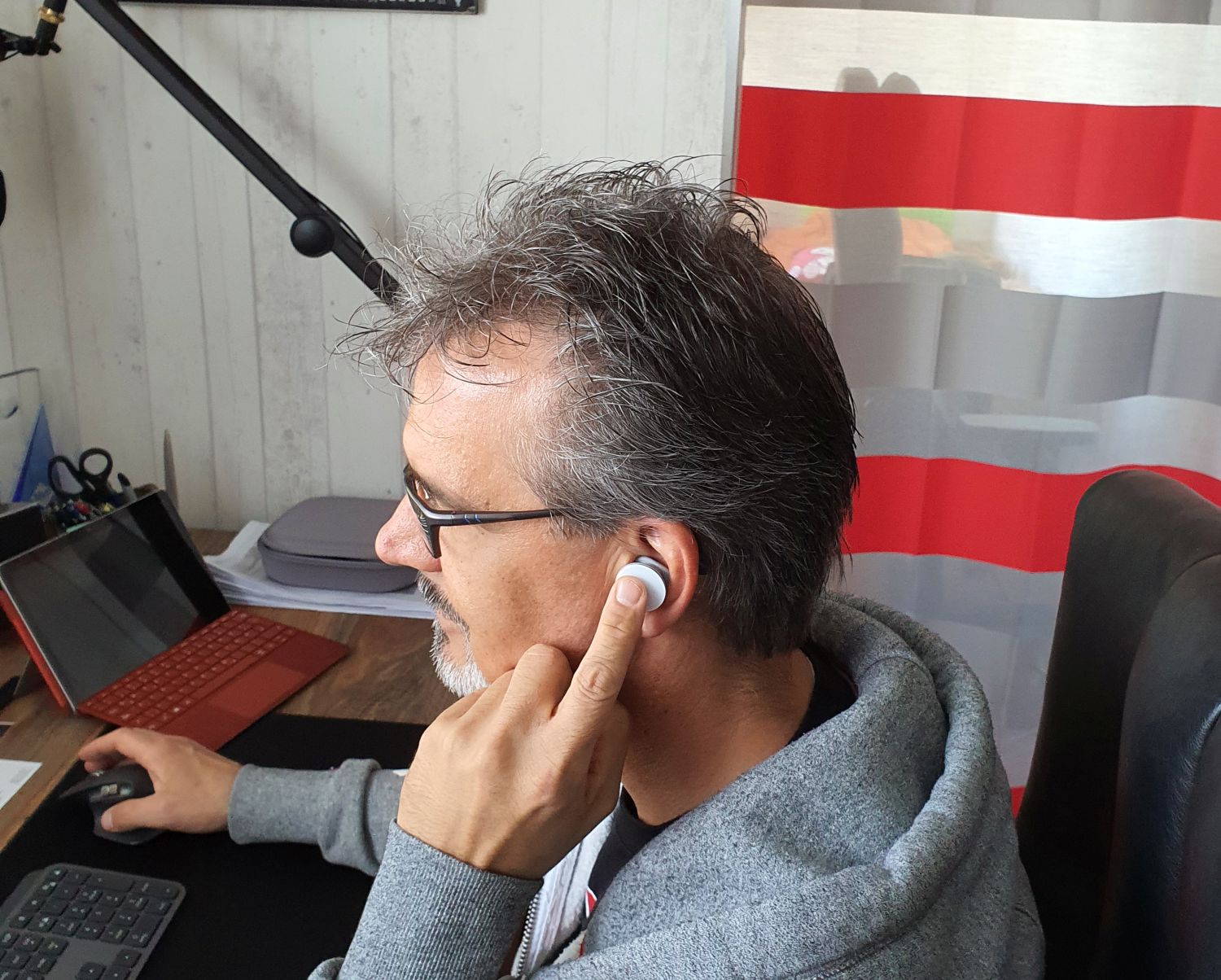 The gesture control requires practice and so far I haven’t warmed up with it. Often a gesture is simply not recognized at all if one does not use the full area for it or only uses the fingertip. For me, this often leads to me getting stuck on the edge. If you then move a little too quickly, you get the thing out of your ear instead of performing the desired function.

The movements must also be carried out very accurately. So if an earbud slips just a little bit, or because of the anatomy, it doesn’t fit exactly as the manufacturer intended, then the gesture is simply no longer recognized. Since there is no diagnostic swipe gesture, a little tolerance in the detection would be appropriate here. Perhaps this can be readjusted later with a firmware update.

For the moment, I would rate the gesture control as a gimmick, but not as a reason to buy. There is still plenty of room for improvement.

The following point not only has something to do with the product, so I first considered outsourcing it to my own article. As you can see, I didn’t do it.

I wanted to use the Surface Earbuds to listen to music while sitting at a desk while being able to answer and make calls. This fails at first because the earbuds do not have multipoint Bluetooth. So you cannot connect to my smartphone and my PC at the same time, as the Surface Headphones do, for example. Unfortunately, I had taken this for granted, and so my lack of experience with in-ears caught up with me. There are currently no in-ears that can do that (correct me if I’m wrong). This is obviously not yet technically feasible.

But hey, why is there the app “Your smartphone” for the PC, which can also be used to control smartphone telephony from the PC. So just pair your smartphone and earbuds with your PC and be happy, right? No, unfortunately wrong, because this “double Bluetooth connection” does not work. If the call goes through the PC speakers, everything is ok, but as soon as you activate the earbuds, the audio connection from the phone to the PC is lost and the sound comes from the internal smartphone speaker. Mission impossible. I tested it with my PC, the Honor MagicBook and the Surface Go 2, it is the same everywhere, so it is obviously a basic Bluetooth limitation that you cannot receive the sound from a Bluetooth device and to a second Bluetooth -Device can pass on.

Apart from the lack of multipoint support, the Surface Earbuds are not to blame for this dilemma, but they are unsuitable for the purpose for which I actually wanted them. If someone has a tip for me on how to solve this, please report.

PlayStation Now: number of subscribers has doubled in one year but remains far from the Xbox Game Pass
Great promotion on the Samsung Galaxy S20 +
Comment